Facebook is all set to unveil new news feed 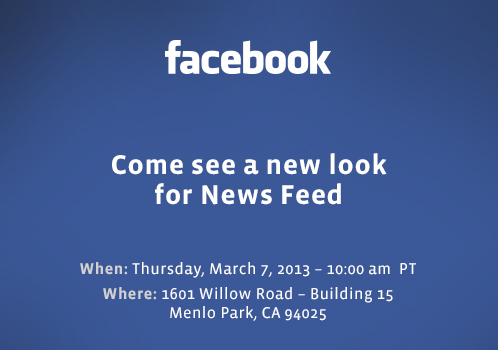 On March 7 this year in a media event facebook will showcase the makeover of facebook news feed.

According to the sources facebook has started sending email invitation to Media Companies to unveil the new change in news feed; the event is all set to happen at its Menlo Park, California headquarters on March 7, 2013.

Facebook’s newsfeed, which displays an ever-changing stream of the photos, videos and comments uploaded from a user’s network of friends, is one of the three “pillars” of the service, along with search and user profiles, Chief Executive Mark Zuckerberg has said.

However the web company facebook is enhancing the web version of user interface as day progress but its mobile version apps are yet to be revamped.