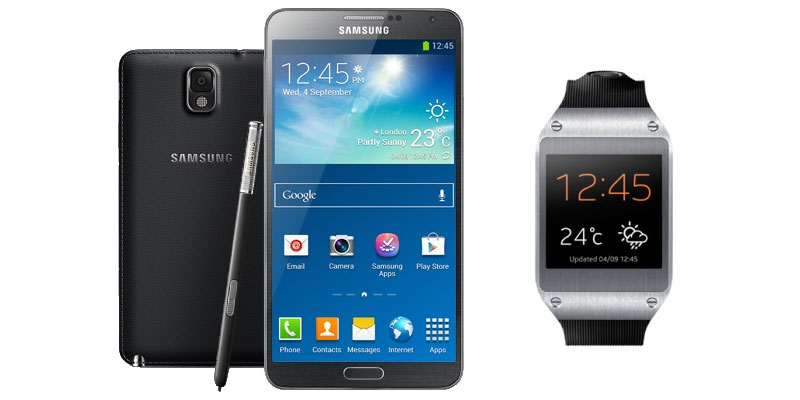 Enjoy the exclusive technological miracles with new devices of South Korean company, Samsung Note 3 and Samsung Smart Watch Gear, which are sure to geeks like you go gaga at first glance.

South Korean tech-titan is back to strengthen its place in the heart of millions of geeks. The countdown for the release of much-anticipated devices** Samsung Note 3 and Samsung Smart Watch Gear **has started. The pre-orders have begun and tech-loves are excited to enjoy these gadgets with their own hands and to analyze how experts at Samsung are day by day exploring the new avenues of technology.

Indian geeks would have to shell out Rs. 49,900 for grabbing Samsung Note 3 Phablet and Rs. 22,900 for Samsung Smart Watch Gear. Both devices would be rolled out on September 25.

However, do not forget that Smart Watch, company’s first wearable tech device, can be bought only along with Note 3. The buyers also need to pay attention that currently this smart watch can work just with Note 3 and Galaxy Note 10.1 2014 Edition. All these three devices were unveiled at IFA 2013 in Berlin. But, a customer-friendly step of company, buyers have the option to purchase Note 3 in monthly instalments over a year.

Obviously, Note 3 would prove for the geeks the most expensive high-end phone from this company; however its wonderful specs would make them dance at once. With its technologically advanced S Pen, you can instantly make note on phone and enjoy several other apps.

Moreover, it is packed with 5.7-inch full-HD Super AMOLED display, 13-MP rear camera and a 2-MP front camera. Note 3 is powered by 2.3GHz quad-core Snapdragon 800 processor ensuring its super fast speed. Android 4.3 Jelly Bean replete with huge apps store is also here. Powerful 3,200mAh battery would provide the back up of around 24 hrs.

What is more exciting for the tech-enthusiasts is the news that Samsung has also jumped first time on the bandwagon of technical wearable devices. Its Galaxy Gear Smartwatch is certain to take on the devices of other brands including Sony Smartwatch 2 and Qualcomm Toq. Interestingly, Samsung smartwatch is packed with a 1.9-MP camera, which is still absent in the second device of Sony as well as from Qualcomm gadget.

No doubt, Sony claims that its smartwatch can support all Android devices. Similarly Qualcomm smartwatch supports AllJoyn technology to let phones and watches communicate with each other. However, Samsung is expected to bring out software updates in some months and then Samsung smartwatch would be seamlessly connected with Android devices. This device features 1.63-inch OLED display, which can display messages, take snaps, shoot videos and make calls.